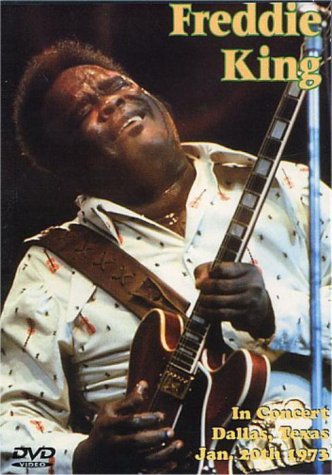 On January 20, 1973, Freddie King and a tight quartet performed at a TV studio in Dallas, Texas. ‘It was humming in there,’ recalls director Jim Rowley. ‘Absolutely cooking. ‘ King was 38 and enjoying what he called ‘the Fillmore circuit’ in America as well as the adulation of throngs (including adoring rock stars) in Europe, especially England. This was the second time King had the brass ring firmly in hand, the first being during the early 1960s ‘dance party’ era and his success with Hide Away. It all ended too soon with King’s 1976 death but he left us a vibrant musical legacy which includes concert performances like this, a stunning example of a blues master coming to triumphant terms with 1970s African-American grooves and ‘playing funky. ‘
The band is incredibly tight and funky, Freddie’s playing top notch, singing voice is in fantastic form…just an incredible concert. Taped for a Dallas PBS Station in 73, Freddie and his band give it their all. The best King DVD.

I love the tip, I love the top
I love you better than a hog loves slop

‘Cause you’re a big legged woman
With a short, short miniskirt
Promise me darlin’
You’ll never make me feel like dirt

Do you have the vine goes around the stump?
You are mine, call it sugar lump

‘Cause you’re a big legged woman
With a short, short miniskirt
Promise me darlin’
You’ll never make me feel like dirt

PS.: They were three real kings of Blues B.B. King, Freddie King and Albert King, if you love them this t-shirt is for you